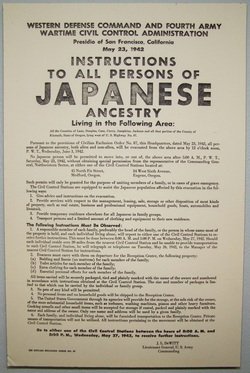 This scene took place on May 13, 1942, at Eugene’s train station as Michi Yasui, born in Hood River and then a 21-year-old senior at the University of Oregon, watched a train from Hood River carry 555 individuals of Japanese descent.  Most  were American citizens born in this country, to be held indefinitely at Tule Lake in northern California, one of ten War Relocation Authority internment camps that were built in some of the most desolate parts of the U.S. during World War II.  None of them had committed any special offense or was suspected individually of ill will towards the U.S.  But collectively, they had long been objects of suspicion and, with the outbreak of war with Japan after Pearl Harbor, they had been deemed a national security threat.  Executive Order 9066, signed on February 19, 1942, codified the hostile feelings many felt to those of Japanese decent and allowed their forced exclusion from all of California and western Oregon and Washington.  Over 110,000 people were taken from their homes.  Many never came back.

Currently, there is no point or path that commemorates Eugene’s part in the largest, single governmentally-organized forced movement of people in American history.  What does exist is a web of thousands of Oregonians like Michi, whose lives were changed by the internment.  Some were born in Oregon, other moved here after the war.  A few have stories that are well known, most have lived quiet lives.  Over 3,600 Oregonians were interned during World War II, and nobody knows how many survivors live here today.  But as anyone who knows an internee understands, one cannot help but be amazed at the history in Eugene that is largely unknown.

The three individuals described here whose lives at different times intersect with Eugene give a sample of the experiences that internees had.  No story could capture the 110,000 lives internment transformed, but these are laid out in the hope that they will nurture an appreciation for the effects the Japanese-American internment had on members of this community.